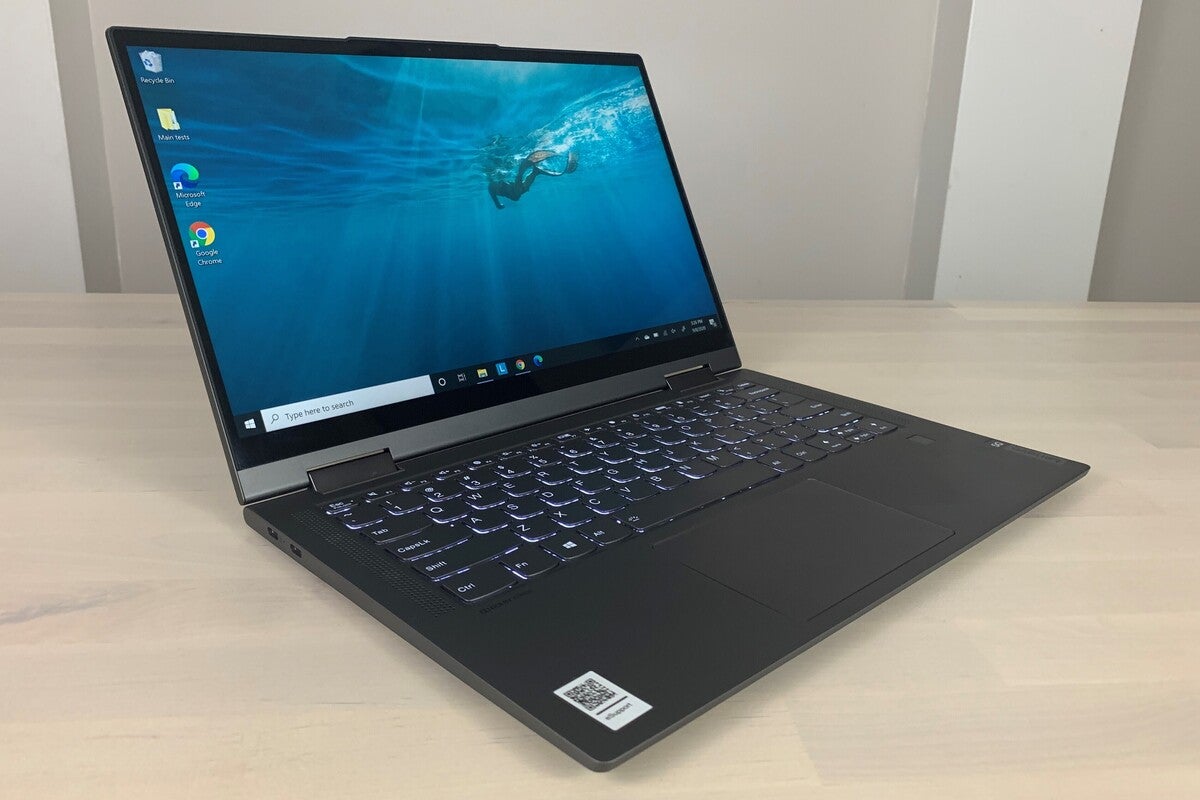 The Flex 5G delivers blazingly fast 5G speeds and amazing battery life, but its Snapdragon 8cx processor will hold you back.

The Lenovo Flex 5G is the first laptop capable of tapping into 5G networks—Verizon’s, in this case—and unleashing cellular download speeds that will leave your Wi-Fi router in the dust. Even better, the Flex 5G’s battery will last you all day, and then some.The Flex’s crazy battery life comes at a price, though. This 14-inch, 2-in-1 laptop ($1,400 at Verizon) tips the scales at nearly three pounds, while its Snapdragon 8cx 5G CPU chugs during some everyday computing tasks. We were less than impressed with the Flex 5G’s shallow keyboard. Finally, you’ll need to consider Verizon’s still-sketchy 5G coverage area (in just 36 cities so far), as well as the slew of competing 5G laptops that are poised to go on the market.

This review is part of our ongoing roundup of the best laptops. Go there for information on competing products and how we tested them.

Flex 5G ConfigurationLenovo offers a wide variety of Flex-branded 2-in-1 laptops, including 14- and 15-inch models with 10th-gen Intel Core i3 and i5 Comet Lake CPUs. But with its Snapdragon 8cx processor (officially known as the Snapdragon 8cx 5G) and integrated 5G networking capability, the Flex 5G stands alone in Lenovo’s Flex lineup and has no 5G competitors—at the moment. The Lenovo Flex 5G will set you back $1,400, or you could go with Verizon’s two-year, $58.33 installment plan. Besides the cost of the laptop itself, you’ll need to consider Verizon’s 5G Ultra Wideband Connected Device Plan, which costs $30 per month with an existing line,or $90 per month without one.

The Flex 5G won’t be the sole 5G laptop for much longer. A veritable avalanche of competitors was announced earlier this year, including 5G versions of the Dell Latitude 9510, the HP Elite Dragonfly G2, and Lenovo’s own ThinkPad X1 Fold, a foldable laptop that knocked our socks off during a brief hands-on this summer. More recently, Samsung unveiled the Galaxy Book Flex 5G powered by Intel’s brand-new 11th-gen CPU. Acer is prepping the 5G-capable Spin 7, a 2-in-1 laptop running on the next-generation version of the (already outdated!) Snapdragon 8cx 5G that sits inside the Lenovo Flex 5G.So while the Lenovo Flex 5G currently stands as the best—and only—option for anyone who wants for a 5G laptop, shoppers will have many more choices in the months ahead. That reality alone should give those considering the Flex 5G a moment of pause, unless you really, really want to be the first on your block to own one.

With that preamble out of the way, here are the specs for the Lenovo Flex 5G:

While 5G is the headliner as far as the Flex 5G’s specifications are concerned, let’s tackle some other details first (we’ll have plenty to say about 5G a little later), starting with that Snapdragon chip.

Qualcomm’s Arm-based Snapdragon 8cx processor was initially touted as a viable alternative to more common X86-based Intel chips. It packed in roughly the same performance as Intel’s U-series Core i5 CPUs and delivered amazingly long battery life. The reality is a bit more complex. Our review of the Snapdragon 8cx-powered Samsung Galaxy Book S showed decent results in multimedia and graphics performance (the latter courtesy of the 8cx’s Adreno 680 CPU), but disappointing scores in photo editing and (crucially) day-to-day productivity. You’ll see the details in our Performance section.

The 8cx’s Arm architecture also has important implications for the kinds of Windows apps you will—and won’t—be able to run. The 32-bit Windows programs encoded for X86 (as the vast majority of Windows apps are) can run on an Arm laptop thanks to the magic of emulation, but 64-bit X86 apps can’t. While many of the most popular day-to-day programs—you know, Microsoft Office, Edge, Google Chrome, and Firefox—do have 32-bit versions available, Adobe Creative Cloud is a notable exception. Most AAA games will be out of the question too, not that the 8cx’s integrated Adreno 680 graphics core would have a prayer of running any of them smoothly.

Before making the jump to a Snapdragon-powered laptop like the Lenovo Flex 5G, make sure that your must-have programs—particularly the arcane ones, not to mention your company’s VPN—have either 32-bit X86 versions available, or 64-bit versions that are compiled for Arm. Moving on from the CPU, the Lenovo Flex 5G’s 8GB of low-power RAM is adequate (although 16GB would have been even better), as is the 256GB SSD (although you’d be better off relegating media to the cloud). The 14-inch full-HD touchscreen promises to be relatively bright, while the integrated Qualcomm Adreno 680 GPU should offer a slight boost over Intel’s competing UHD integrated graphics. While the Flex 5G’s cellular support (including both the ultra-fast mmWave and slower but more widespread sub-6GHz versions of 5G) grabs all the headlines, the laptop’s Wi-Fi 5 networking feels a tad behind the times as the new Wi-Fi 6 standard gains momentum.DesignGroundbreaking though it may be from a cellular networking standpoint, the Lenovo Flex 5G’s design is otherwise familiar.

ALSO READ:   How to Utilize a Mobile Phone App to Discover Your Vehicle

The Lenovo Flex 5G, seen from the rear. Look familiar?
From its pedestrian “iron gray” aluminum magnesium shell and nearly featureless flat lid to the twin 2-in-1 hinges that rotate for tablet, kiosk, and tented tabletop use, the Flex 5G cuts a slim, nondescript figure. There’s one subtle innovation: a notch directly above the webcam makes it easier to pry the laptop open with your fingertips. The Flex 5G does feel a little heavy for a 14-inch laptop. Of course, that extra heft includes a 60 watt-hour battery, which (as we’ll see in a bit) earns its keep and then some.

The Lenovo Flex 5G’s 14-inch, full-HD (1920×1080) display is pleasingly vivid and bright, with a specified maximum of 400 nits that was readable outside under an umbrella on a sunny day. The touch-enabled display does have a glossy finish, however, so glare could be a problem in direct sunlight.

The 2-in-1 Lenovo Flex 5G can be tented on a desktop, or you can swivel its display all the way around for tablet use.

Viewing angles on the Flex 5G’s IPS display are unsurprisingly solid, dimming only slightly when viewed from off-center vertical or horizontal angles. The Flex 5G’s touch display reacted smoothly to my taps and swipes. A stylus is optional—you can snap up the battery-powered Active Pen for $45 from Lenovo.

Keyboard, trackpad, speakers, and webcamI’ll just cut to the chase here: I wasn’t a big fan of the Lenovo Flex 5G’s keyboard. The key caps themselves sit awfully low in the Flex 5G’s chassis, making the keyboard feel like it’s nearly flat. Travel distance didn’t feel that great either. On the plus side, I did like the tactile, rubberized feel of the Flex’s inside surface, including the palmrest.

The Flex 5G’s touchpad did a nice job, scooting the cursor around with a minimum of jitter. The touchpad was also adept at rejecting false inputs: Even when I brushed my palms back and forth on the trackpad’s surface, the cursor rarely budged. Ben Patterson/IDG
The Lenovo Flex 5G’s keycaps sit uncomfortably low in the laptop’s keyboard.
The twin upfiring speakers on the Flex 5G sound reasonably good, cranking out crisp, detailed sound, albeit with little in the way of low-frequency response. The speakers on the Flex are optimized for Dolby Atmos, an audio format that can deliver immersive 3D audio from as few as two drivers.

ALSO READ:   SpaceX’s Satellite Web Service Latency Can Be Found In Under 20 Milliseconds

We’re seeing—and hearing—Atmos in more and more laptops and even smartphones (iOS has natively supported Dolby Atmos since 2016). The effect is impressive for a laptop, although you’re still usually better off using external speakers or a decent pair of cans.The video produced by the Lenovo Flex 5G’s 720p webcam looks about as blotchy as you’d expect, although the Flex 5G’s video images look a tad more washed out and herky-jerky than the norm. The laptop does come with an IR camera for facial recognition, which I used almost exclusively—and quite successfully—during my testing. The Flex also has a fingerprint reader if you’d rather sign in to Windows with your fingertip.

PortsThe Lenovo Flex 5G comes with exactly two USB ports, and they’re both SuperSpeed USB 10Gbps Type-C connectors, situated on the laptop’s left side. Ben Patterson/IDG
The left side of the Lenovo Flex 5G boasts a pair of SuperSpeed USB 10Gbps Type-C ports.
On the right side of the Flex 5G is the power button, a combo audio jack, an airplane mode switch, and … that’s it.

No USB Type-A for you! (We like the airplane mode slider, though.)
So, what’s missing? USB Type-A ports for starters, so you’ll need a USB-C hub (we have some recommendations) if you want to use the Flex 5G with a wired mouse or printer with legacy connectors. There’s also no memory card reader or HDMI port, although you can always connect a 4K monitor to one of the USB-C ports in DisplayPort Alt mode.

The Lenovo Flex 5G’s cutting-edge bandwidth is nice when you can get it, given the current limits of 5G networks.. Its battery life is superior. But its Snapdragon 8cx processor will hold you back.

Samsung debuted its newest flagship smartphones and more today at its Unpacked 2021 event. The major launches include three new iPhone 12 competitors with the Galaxy S21, S21+, and S21 Ultra as well as AirPods Pro and AirTags competitors. Samsung launched its new flagship Galaxy smartphones about a month earlier than it traditionally does this…
Read more
Health

© Reuters. FILE PHOTO: U.S. President-elect Joe Biden walks into the Queen Theatre in Wilmington By Ann Saphir (Reuters) - U.S. President-elect Joe Biden's proposal to pour $1.9 trillion into a hobbled economy could lay the foundation for a surge in jobs and spending that many economists say is needed to avoid long-term damage from…
Read more
Tech

Samsung debuted its newest flagship smartphones and more today at its Unpacked 2021 event. The major launches include three new iPhone 12 competitors with the Galaxy S21, S21+, and S21 Ultra as well as AirPods Pro and AirTags competitors. Samsung launched its new flagship Galaxy smartphones about a month earlier than it traditionally does this…
Read more